The contents of this page may be found at https://asus.laptopdirect.co.za. The contents are copyright. Although every effort has been made to ensure the accuracy of information, no reliance may be placed on the accuracy of the contents or any price found on this site. Any and all information should be used for reference purposes only. This Laptop website is offered as an extension to laptopdirect.co.za as a reseller service to the public. Laptop Direct C.C. is the legal owner of this website, the Laptop Direct brand and the Laptop Direct logo. The information and pricing may have been valid prior to this page being captured, however, a print is not a valid advertisement for pricing nor specifications, and only products that have been sent by quote are valid. Prices are subject to change without prior notice. T&C's apply.
Compare products (0)     Clear 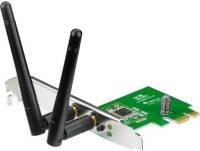 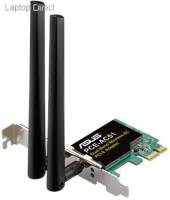 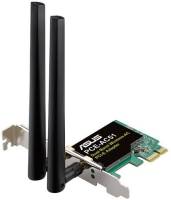 Cloud Fax Sign up for your Free Fax To Email here

It is very important to understand the throughput per device is 500Mbit/s maximum. This is nevertheless twice s fast as the 801.22n. This is close range. At greater distances, speeds can hit 50Mbit/s and 100Mbit/s which is still very fast and enough for hi-def streaming.

This is accomplished by extending the air interface concepts embraced by 802.11n: wider RF bandwidth (up to 160 MHz), more MIMO spatial streams (up to 8), multi-user MIMO, and high-density modulation (up to 256 QAM).

IEEE 802.11n-2009 is an amendment to the IEEE 802.11-2007 wireless networking standard to improve network throughput over the two previous standards 802.11a and 802.11g with a significant increase in the maximum net data rate from 54 Mbit/s to 600 Mbit/s (slightly higher gross bit rate including for example error-correction codes, and slightly lower maximum throughput) with the use of four spatial streams at a channel width of 40 MHz.

802.11n standardized support for multiple-input multiple-output and frame aggregation, and security improvements, among other features.

IEEE 802.11b-1999 or 802.11b, is an amendment to the IEEE 802.11 specification that extended throughput up to 11 Mbit/s using the same 2.4 GHz band. This specification under the marketing name of Wi-Fi has been implemented all over the world. The amendment has been incorporated into the published IEEE 802.11-2007 standard.

802.11 is a set of IEEE standards that govern wireless networking transmission methods. They are commonly used today in their 802.11a, 802.11b, 802.11g and 802.11n versions to provide wireless connectivity in the home, office and some commercial establishments.

802.11a supports bandwidth up to 54 Mbps and signals in a regulated frequency spectrum around 5 GHz. This higher frequency compared to 802.11b shortens the range of 802.11a networks. The higher frequency also means 802.11a signals have more difficulty penetrating walls and other obstructions.

IEEE 802.11ac is a wireless networking standard in the 802.11 family (which is marketed under the brand name Wi-Fi), developed in the IEEE Standards Association process, providing high-throughput wireless local area networks (WLANs) on the 5 GHz band. The standard was developed from 2008 (PAR approved 2008-09-26) through 2013 and published in December 2013 (ANSI approved 2013-12-11).

The specification has multi-station throughput of at least 1 gigabit per second and single-link throughput of at least 500 megabits per second (500 Mbit/s). This is accomplished by extending the air-interface concepts embraced by 802.11n: wider RF bandwidth (up to 160 MHz), more MIMO spatial streams (up to eight), downlink multi-user MIMO (up to four clients), and high-density modulation (up to 256-QAM).

802.11ax is all about improving speeds and reliability in multi-device and crowded environments, from town house complexes and flats, to stadiums and universities, where there are many devices.

Here's some of what Wi-Fi 6 is expected to accomplish:

What is QoS (Quality of service)?

QoS allows you to priorities devices and applications over others. For example, VOIP and streaming traffic can be prioritized over IOT devices, or FTP applications. This is especially important if you have many devices on a network competing for bandwidth.